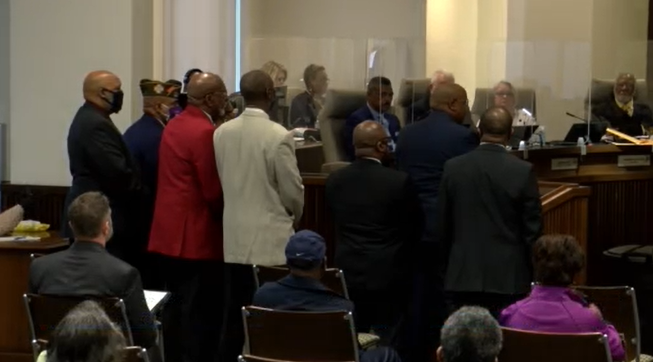 COLUMBUS, Georgia (WRBL) – A group of community activists came to the defense of Columbus Police Chief Freddie Blackmon at Tuesday’s city council meeting. The show of support comes after a tense demonstration at the last council meeting, when the president of a police organization challenged Blackmon’s leadership.

The Fraternal Order of Police filled Columbus council chambers on Feb. 22 as the organization presented the results of an investigation challenging the leadership of Chief Blackmon.

FOP calls for leadership change in Columbus Police Department, ‘the community and the police department are in crisis’

On Tuesday, the room was packed again, this time with ministers and community leaders who support Blackmon. They appealed to the leaders of the city of Columbus: give Blackmon time to develop responses to the shortage of officers and growing crime.

“We wanted to advocate that our city council not be influenced by any political gestures or maneuvers that may take place during this time,” said Adrian Chester, president of the Interfaith Ministerial Alliance. “But that they support the chief of police, not only with visual support, but also with resource support so that the community can feel safe and he can do his job effectively.”

Blackmon was present as Chester and other leaders came to his defense; a stark contrast to the comments he faced two weeks ago. At the previous board meeting, he sat in the front row as Columbus FOP President Ralph Dowe questioned Blackmon’s ability to lead the department.

Dowe, who served in the Columbus Police Department for 32 years, said CPD officers lost faith in Blackmon. He showed the council the results of a telephone survey conducted by the FOP council. Of 232 respondents, only 5% of officers said they trusted the leader.

Wayne Hailes, president of the Columbus NAACP, asked about the survey results.

“What we know now is that this was an unverifiable investigation that was only conducted by a few members,” Wayne told News 3 after Tuesday’s council meeting. “Now what we have found is that not all members have been contacted; but the way it was presented was wrong I think, because [Dowe] come before the city council with this without having to confront Chief Blackmon.

Blackmon has spent more than three decades rising through the ranks of the Columbus Police Department, but has only been its chief for 15 months.

He is facing mounting criticism after a year of record violence. Columbus recorded 70 homicides in 2021, breaking the previous record of 46.

Chief Blackmon and city leaders say the police department is stepping up patrols and cracking down on crime, but they are doing so with an already stretched department.

In January, Blackmon told News 3 the department had between 120 and 130 vacancies.

Blackmon says the department is adequately staffed to provide adequate service, but tackling the surge in crime takes time.