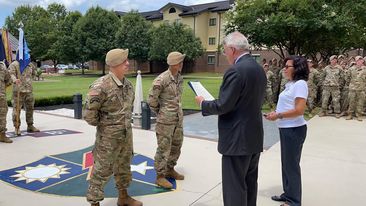 On June 11, Staff Sgt. Michael D. Abuan and Staff Sgt. Jason R. Palma – both from the 75th Ranger Regiment, 3rd Battalion, Alpha Company – ate with friends at the Loft on Broadway. They heard several gunshots and got into position to help two victims.

The proclamation reads in part: “As people crowded to the back of the restaurant for security reasons, these Army Rangers walked to the front of the building to make sure the civilians were in. security ; and arriving at the entrance of the restaurant and although they did not know the location of the gunman, Abuan and Palma left the security of the building to rescue a victim who had been shot in the leg.

“Before bringing him to safety inside, Palma made a tourniquet from the belt of a passer-by; and once inside, Abuan applied a tourniquet, and Palma checked the victim’s tibial pulse to make sure blood flow had been restricted.

They then continued their bravery, according to the proclamation.

“Abuan stayed with the first victim and continued to monitor his vital signs, Palma came to help a citizen who was caring for a second victim, a woman; and Palma determined that the second victim had a gunshot wound to the abdomen without an exit wound. He applied a seal and prevented hypothermia.

Mayor Skip Henderson said he was grateful the two soldiers were in place if their training and expertise took over. He called Auban and Palma “real heroes”. Soldiers are heroes and those of us who live in the Chattahoochee Valley know it, Henderson said.

“That night we saw him,” Henderson said. “When others walked away, they were heading towards danger.”

The June 11 shooting in the 1000 Block of Broadway was the centerpiece of a three-act shooting incident that began in Phenix City earlier that night and ended in an arrest the next day.

Justin Tyran Roberts, 39, was arrested the next day and charged with the shooting, which included an incident on Lower Broadway under the Oglethorpe Bridge.

WRBL News 3 will have more on this story later today.

“Taste of Columbus” to fuel the growth of the community