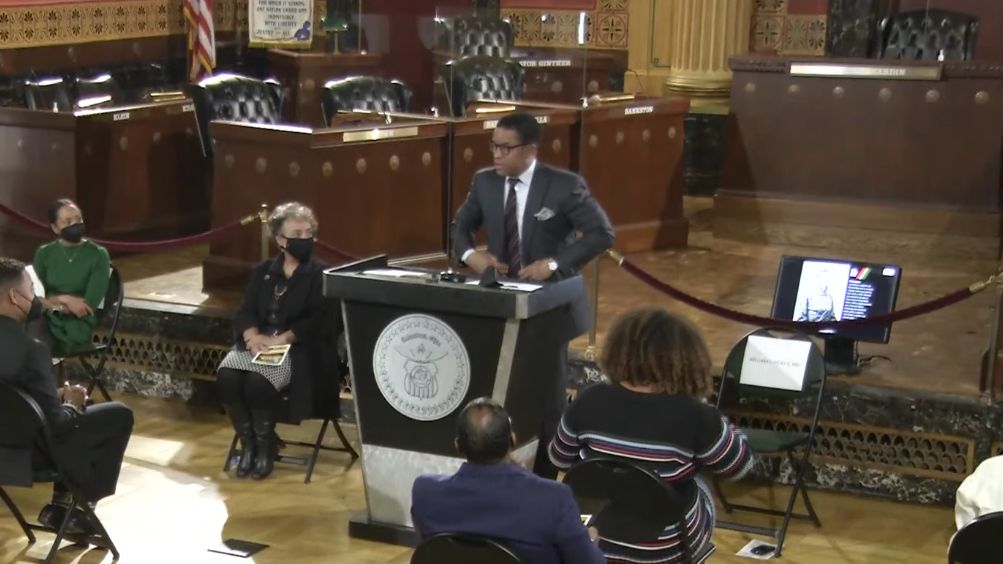 ​COLUMBUS, Ohio — A Columbus City Council Black History Month celebration on Friday featured reflections on the pain of the pandemic for black residents and honored healthcare professionals who have stepped up to improve health equity.

“Your ZIP code can have a 20-year difference on your mortality, and I’m talking about this city,” he said.

Speaking before five winners were honored with Poindexter Awards for their efforts to improve the quality of life for Black Columbus residents, Hicks said the city needed to address a range of issues, including environmental issues affecting communities. black people, unstable housing security, food deserts and lack of diversity in medicine.

Hicks said the recipients receiving the award, which is named after the first black member of the Columbus City Council, the Reverend James Preston Poindexter, represent the past, present and future of black health in Columbus and show together a “beautiful” trajectory of leadership and progress, even if there is still a lot to do in the city. Hicks’ father, Ohio State oncologist Dr. William J. Hicks, who is nearing the end of a 48-year career in the medical field, was recognized on Friday.

Columbus Public Health Commissioner Dr. Mysheika Roberts, another of the winners, said as a Lakers fan, she was inspired to pursue a career in public health while in college and Magic Johnson announced that he was HIV positive.

“Hearing him say he had HIV was huge for me as a college student, as an African American, and that was back when we didn’t know much about HIV and how it was getting transmitted, and for him to say that and look so healthy, that was really a defining moment for me. At that point, I decided I wanted to do public health,” Roberts said “I had no idea there were so few African Americans leading public health at that time.”

Roberts shared another defining moment of her tenure as the first black health commissioner in Columbus, which came at the start of the pandemic. Roberts said a feeling hit her that the Arnold Sports Classic, a flagship event for the city, should not take place, due to the emergence of the virus.

After calling the mayor, then Ohio health director, Dr. Amy Acton, with her concerns, Roberts received a text to immediately report to the governor’s office.

“I showed up at the governor’s office, and walked into a room full of white men, and everyone was looking at me, and I had to explain to them why I thought the Arnold needed to be changed, adjusted or canceled. It was a daunting moment to say the least, but I followed my instincts and followed the science,” she said.

The winner, Dr. Laura Espy-Bell, an OhioHealth emergency physician who is involved in a number of health diversity and inclusion initiatives, highlighted the importance of pipelines for black students to pursue a career in medicine.

Columbus City Council Speaker Shannon Hardin said he was proud that black Columbus residents are now more vaccinated than white residents, in part because of the work of the award winners.

“It was no easy task when there was so much mistrust, and rightly so, of our past histories around medicine and how it was used,” he said.

Hardin said the past two years have been particularly difficult and traumatic for Black Columbus residents, with data showing that black hospitalization rates are disproportionately high.

Friday’s event honored Dr. Jefferson Alfred Blair, who was an OBGYN in Columbus for more than 45 years and passed away in 2011. Jefferson was the first African American accepted into Ohio State’s medical internship program. Hicks said it was important to honor trailblazers, like himself, given the continued lack of representation in medical careers.

Tavares said his career vision was to eliminate inequities in health care.

“We know we get better health outcomes when people see people who are similar to them or who are culturally appropriate in the care they share,” she said.

How to start a get rich plan in just one week