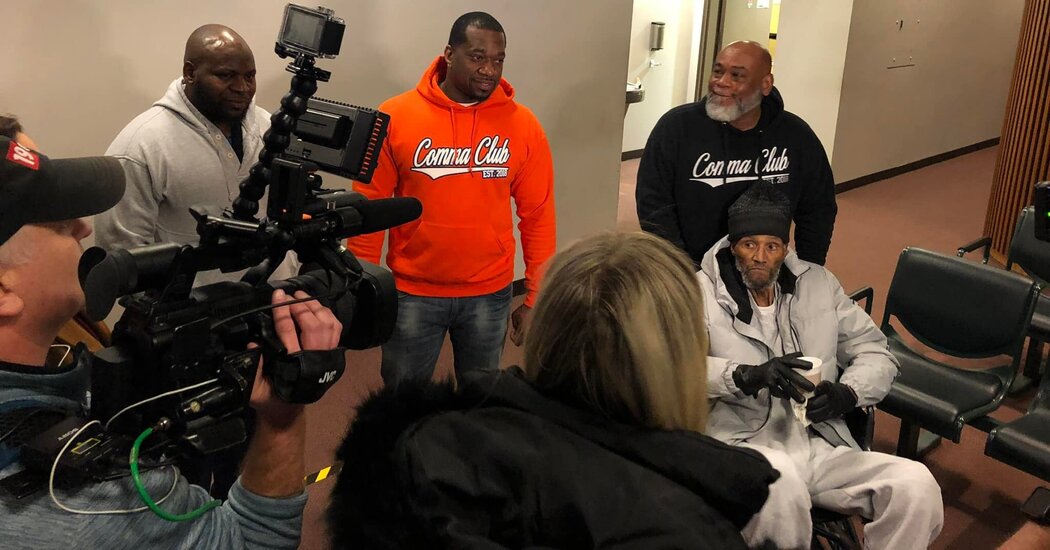 For decades, Isaiah Andrews maintained his innocence in the 1974 murder of his wife, unaware that the key to his exoneration was buried in Cleveland Police Division records.

Cleveland police’s decision to withhold crucial information in the case resurfaced on Thursday, when an Ohio court determined that Mr Andrews, now 84, had been wrongfully jailed for 45 years.

Mr Andrews, who is ill and uses a wheelchair, has been free since May 2020. He was later found not guilty at a second jury trial in October, but the court had to find him wrongfully imprisoned so that he can claim damages from the state. from Ohio.

“I won the battle for this,” Mr Andrews told reporters after the court hearing on Thursday.

Mr Andrews and his wife, Regina Andrews, had just gotten married when he reported her missing from the Cleveland hotel room they were living in while looking for permanent accommodation, according to court documents.

On September 18, 1974, Mr Andrews told detectives he had last seen her just before 8am that day and had been out shopping in the evening, according to court documents.

Ms Andrews’ body was found that afternoon in Forest Hill Park by a worker during her lunch break. She had been stabbed several times and wrapped in bed linen.

At the time of the murder, detectives wrote they believed the crime was committed by Willie H. Watts, who was trying to sell his mother’s valuables to get out of town, according to court documents. He was arrested, but his name was not mentioned during the trial and there is no indication that he was mentioned in the discovery of the case, according to court documents.

Detectives produced no physical evidence linking Mr Andrews to the murder of his wife, and police found no blood in his car or hotel room, but he was found guilty and sentenced to jail at life in 1975. He had previously served 15 years in prison for the murder of his staff sergeant in the Marines, according to the Cuyahoga County District Attorney’s Office.

Investigators released Mr Watts after providing an alibi for the time of death originally estimated by the coroner, according to court documents. The estimate was revised after an autopsy.

Later Mr Watts was charged four times with kidnapping and was jailed for more than 20 years for aggravated arson. Two of the kidnapping cases were later dismissed. Mr. Watts died in 2011, Cleveland.com reported.

The Ohio Innocence Project, which aims to get wrongfully convicted people out of prison, did not know Mr Watts when it decided to look into Mr Andrews’ case in 2015.

“You would never have known from reading the trial transcripts that the police arrested someone else for this,” said Brian Howe, a lawyer for the project.

This information only became available in 2019, after lawyers for Mr Andrews asked for the DNA in the case to be tested. The Ohio Bureau of Criminal Investigation requested records from the initial medical examination and received police records that revealed the other man’s arrest.

Lawyers for Mr Andrews said the new trial was not necessary and they were surprised that Cuyahoga County prosecutors decided to prosecute rather than decline to prosecute.

The prosecutor’s office said in an emailed statement that it considered Mr Andrews’ previous murder conviction in its decision to pursue a new trial. “When this conviction was overturned, we had an obligation to pursue legal action on behalf of the victim and his family,” the statement said.

At the second trial in October, the proceedings consisted mainly of reading aloud from the original trial transcripts in March 1975. The jury found him not guilty.

Mr Andrews’ wrongful imprisonment is believed to be the third longest known in the United States, according to the National Exoneration Registry.

The declaration of wrongful imprisonment on Thursday allows Mr Andrews to pursue a lawsuit seeking damages from the state.

Mr. Andrews also filed a federal civil rights lawsuit against the city of Cleveland in February, accusing police of failing to provide information about the other suspect.

Sarah Gelsomino, a Friedman, Gilbert and Gerhardstein lawyer who represents Mr Andrews, said under state law he was entitled to $56,752.36 for each year of imprisonment, more than $2.5 million. Lawyers will also seek money for lost wages, legal fees and costs of proving his innocence.

However, the money cannot make up for the years Mr Andrews spent in prison.

“He lost everyone when he was in jail,” Ms Gelsomino said. “So he had no family waiting to welcome him back.”

Instead, Mr. Andrews has been supported by a community of others who have been exonerated in Ohio or are still seeking to be exonerated. The Ohio Innocence Project has released 34 people, including 14 cases from Cuyahoga County, since its inception in 2003.

Three members of that community sat behind Mr Andrews in court on Thursday: Lamont Clark, Ruel Sailor and Charles Jackson, who was exonerated in November 2018 after 27 years in prison and who lives with Mr Andrews and helps care from him.

The men told reporters after Thursday’s hearing that it was a day for all of them to celebrate.