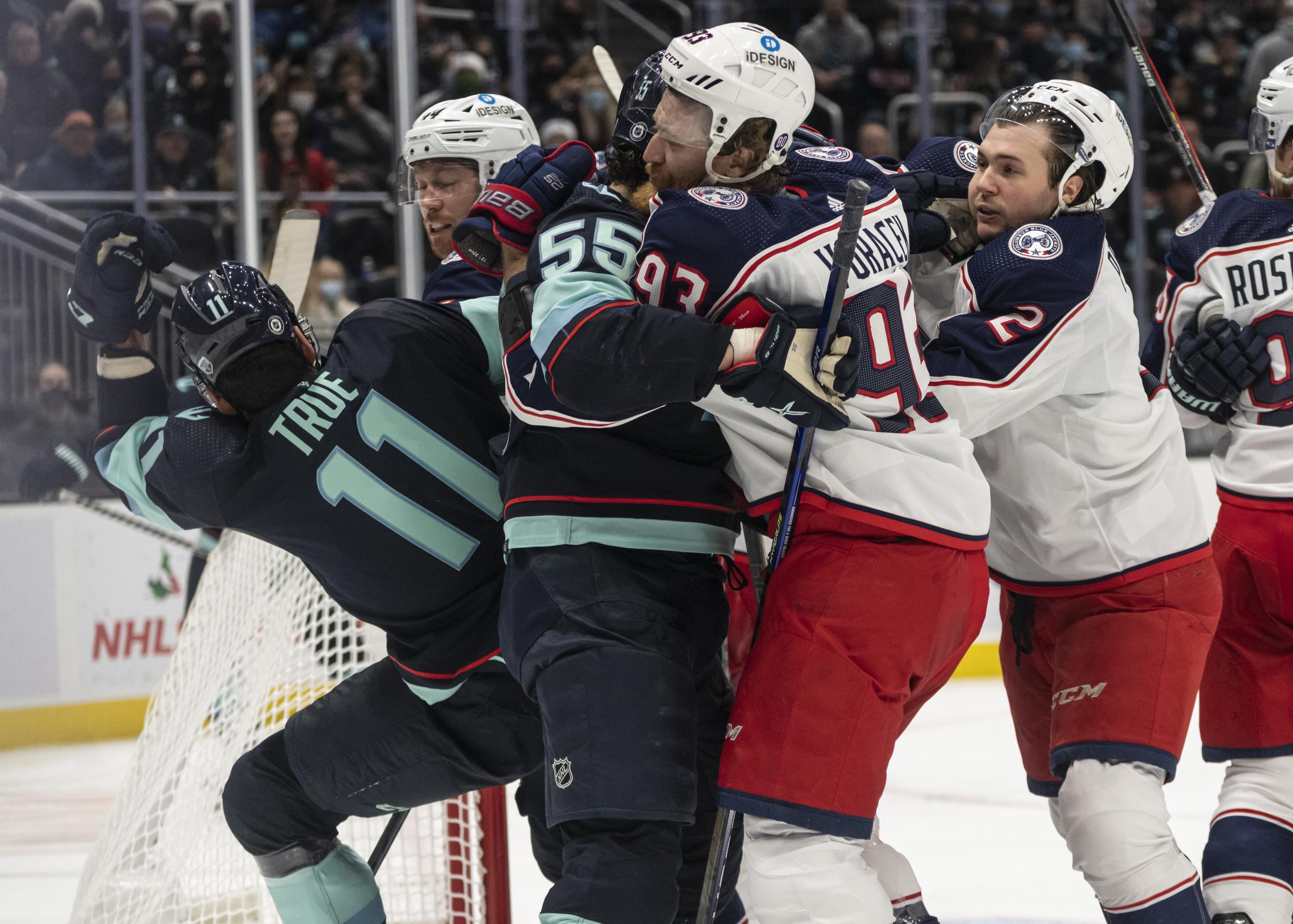 Jack Roslovic and Oliver Bjorkstrand each scored a goal and an assist for the Blue Jackets, who have won only for the second time in eight games.

Elvis Merzlikins made 28 saves and the Blue Jackets held off the furious Seattle rally in the third period.

Seattle rallied with three goals in the third, topped by a wrist shot from Vince Dunn with 4:06 remaining to tie it at 4-all.

Seattle scored twice 22 seconds apart early in the third, with Jaden Schwartz deflecting Joonas Donskoi’s shot past Merzlikins at 3:41 and moments later Morgan Geekie fired a wrist shot on a pass from Mason Appleton to bring Seattle back to 4-3.

Jared McCann added his 11th of the season in the second period for Seattle. The Kraken scored one point, but lost their third straight game.

Philipp Grubauer made 24 saves, but couldn’t get his blocker up in time to deflect Bean’s shot from the right circle in overtime.

Columbus scored four times in the second period to take a 4-1 lead. Bjorkstrand scored at 8:13 of the second, beating Grubauer with a wrist shot from the left circle. Three minutes later, Roslovic redirected Domi’s pass into the net for his fifth of the season.

Then it was Domi’s turn. His breakaway goal at 4:43 of the second gave the Blue Jackets a 3-1 lead, and he added a second score at 2:51 later as Bjorkstrand’s shot slipped between Grubauer’s pads and that Domi was there to guide the puck into the net.

Domi has played a three-point game for the third time this season.

“We’re getting the real-time information here and we got some new information this morning. So we want to make sure that we are clear on who is available for tonight’s game, ”Hakstol said after morning practice. “It’s not ideal to have these kinds of changes on the morning of a game, but like you said, it’s not new to anyone in the world of sport right now.”

Seattle has recalled Charlotte forward Alexander True from the AHL. True is the first former Seattle Thunderbirds player to debut for the Kraken.

It was the first overtime game at Climate Pledge Arena. … Seattle G Chris Driedger was taken off the injured list on Saturday and Joey Daccord was reassigned to Charlotte. … Bjorkstrand collected his 200th career point with Columbus. He is the 11th player to score 200 points with the franchise. … Seattle F Marcus Johansson appeared in his 700th career game. He is the 11th active Swedish skater to reach 700 matches.

Blue Jackets: Columbus is in Vancouver on Tuesday.

Kraken: Seattle is in San Jose on Tuesday.