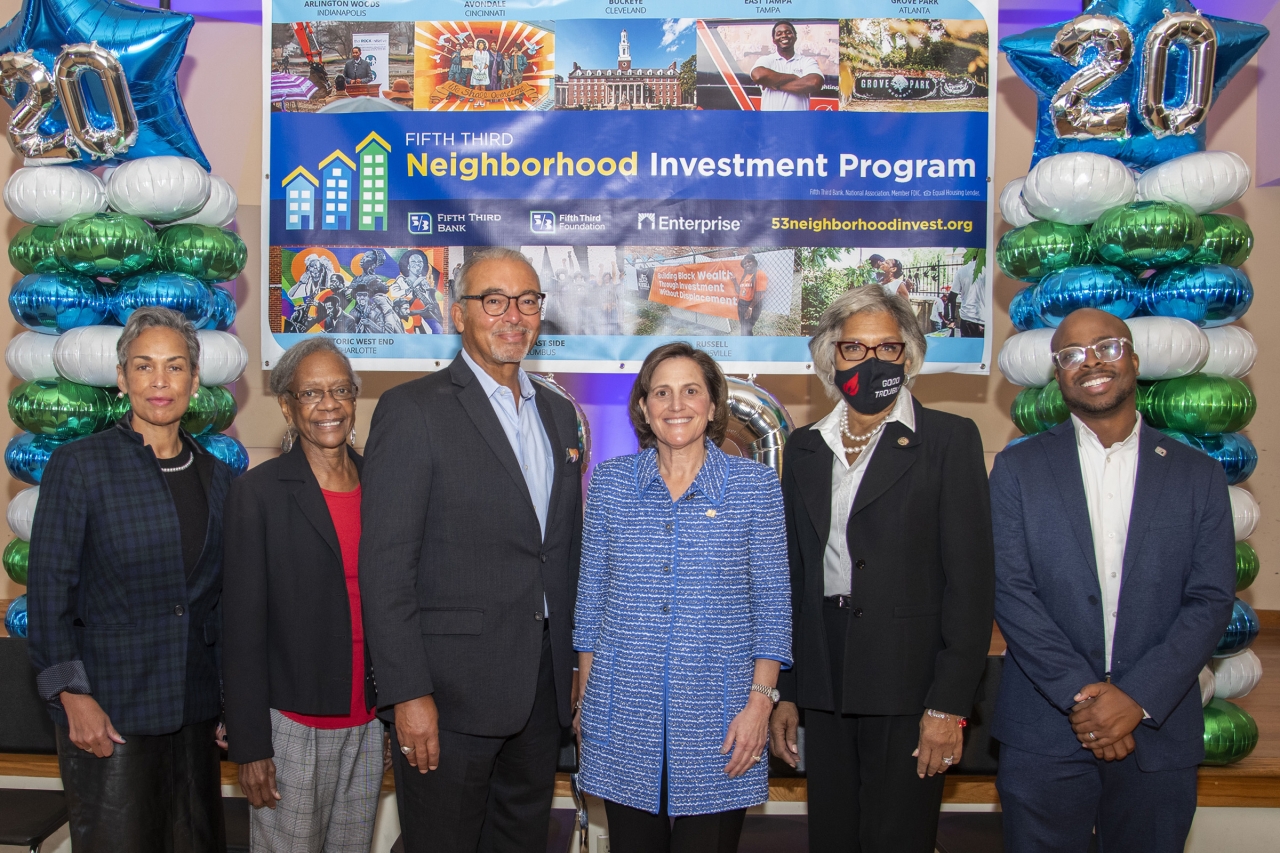 COLUMBUS, Oct. 19, 2021 / CSRwire / – Fifth Third and Enterprise Community Partners today announced a neighborhood program to support and continue efforts to revitalize the Near East Side of Columbus. The neighborhood investment program will focus over three years on the geography of PACTE and intersectoral collaborations. PACT, which stands for Partners Achieving Community Transformation, is a partnership initiated in 2010 by the City of Columbus, Ohio State University, the Columbus Metropolitan Housing Authority (CMHA) and stakeholders from the Near East Side. The Near East Side PACT neighborhood, which is bounded by Woodland Ave to the east; Broad St to the south; I-71 to the west; and I-670 north, was one of the selected locations.

“Fifth Third looks forward to continuing its existing collaboration with one of the city’s most historic neighborhoods, the Near East Side, and investing in a unique way by taking a carefully structured approach to solving the world’s systemic problems. real, â€said Regional Fifth Third. President of the bank, Francie Henry. â€œWe have partnered with this neighborhood since 2015 and over the past six years we have invested in several efforts including the United Way of Central Ohio Neighborhood Leadership Academy, the Columbus Urban League, the Minority Business Assistance Center and the PACT Exterior Home Repair Program. Now, we are delighted to continue our efforts in an even greater and magnified way. PACT’s mission is â€œHonor our heritage and build our futureâ€ and we are delighted to continue our long-term support. “

Fifth Third is collaborating on the initiative with Enterprise Community Partners, a national non-profit organization that exists to make a good home possible for the millions of families who don’t have one. Together, they managed a criteria-based, invitation-only application process to select nine predominantly black neighborhoods that have experienced an extended period of divestment. One of the selected locations was the Near East Side PACT neighborhood. Enterprise will provide technical assistance to support each neighborhood in developing and implementing a plan tailored to the unique challenges it faces. Enterprise will then help assess the plan’s effectiveness in improving the economic well-being of local residents and small businesses. Positive outcomes will include investing in small businesses, home ownership, and workforce development to create positive outcomes such as increased employment, economic stability, and growth.

â€œThe Fifth Third Neighborhood investment program shows what is possible when we make intentional investments focused on black lives and legacies,â€ said Priscilla Almodovar, President and CEO of Enterprise Community Partners. A group of neighborhood partners committed to an initiative that aligns powerfully with our goals as an organization: to increase the supply of housing, advance racial equity, and strengthen resilience and upward mobility. ”

â€œThis investment represents our commitment to holistic community development,â€ said Sheldon K. Johnson, director of community and economic development for Fifth Third Central Ohio. â€œThrough the Neighborhood Investment Program, we are focused on contributing to lasting solutions that address racial disparities in health and wealth. By collaborating with PACT and Enterprise and other community stakeholders, we can build on the foundations of the work that has already been done and have a transformative impact in this historic community.

Fifth Third intends to commit up to $ 20 million in loans, investments and philanthropic support, including grants from the Fifth Third Foundation to the PACT neighborhood of the Near East Side. A combination of capital, products and services will be invested in small businesses, mortgages, philanthropic efforts, and neighborhood revitalization loans and investments.

Elizabeth Seely, founding board member and current chair of the PACT board, said PACT will use the funds to advance PACT blueprint initiatives for community investment, including safe and affordable housing. , health, education and employment opportunities. Potential investments in the program include funding the development of new black-owned businesses, supporting the creation of public art, providing a down payment for middle-income residents, and progressive housing opportunities to create a home. generational wealth, expand access to health services and create financial education, literacy and savings programs for the dreams of the region’s youth. â€œInfusing good practices and development principles intertwined with community engagement, culture and heritage has been our vision and our dream. Fifth Third’s expertise and investment – combined with Enterprise’s knowledge base – make this an exceptionally critical time for our community. And we’re ready – we’re just ready to take advantage of it, â€Seely said.

The neighborhood investment program is part of Fifth Third’s $ 2.8 billion pledge that will provide $ 2.2 billion in loans, $ 500 million in investment, $ 60 million in accessibility funding and $ 40 million in philanthropy from the Fifth Third Foundation as part of the Fifth Third Racial Equality Acceleration, Equity and Inclusion Initiative. The engagement is focused on four strategic pillars that have a direct impact on clients and communities with targeted results enabling the Bank to monitor progress and measure success in the areas of strategic investments, access to capital , financial inclusion and education, as well as social justice and advocacy. This program also aligns with Enterprise’s new strategic plan and its three main goals: increasing housing supply, advancing racial equity, and building resilience and upward mobility.

Additional beneficiary neighborhoods and lead organizations that will lead community efforts under the neighborhood program are:

Enterprise is a national non-profit organization that exists to make a good home possible for the millions of families who don’t have one. We support community development organizations on the ground, aggregate and invest capital to make an impact, advance housing policy at all levels of government, and build and manage communities ourselves. Since 1982, we’ve invested $ 44 billion and created 781,000 homes in all 50 states, all to make homes and communities places of pride, power and belonging. Join us on EnterpriseCommunity.org.

About the fifth third

Fifth Third Bancorp is a diversified financial services company headquartered in Cincinnati, Ohio, and the indirect parent company of Fifth Third Bank, National Association, a federally chartered institution. As of June 30, 2021, the company had $ 205 billion in assets and operated 1,096 full-service banking centers and 2,369 Fifth Third-branded ATMs in Ohio, Kentucky, Indiana, Michigan, Illinois, Florida, Tennessee, West Virginia, Georgia, the North. Carolina and South Carolina. In total, Fifth Third provides its customers with access to approximately 53,000 free ATMs across the United States. Fifth Third operates four main businesses: Commercial Banking, Branch Banking, Consumer Lending, and Wealth & Asset Management. Fifth Third is one of the largest fund managers in the Midwest and, as of June 30, 2021, had $ 483 billion in assets under watch, including $ 61 billion for individuals, corporations and nonprofits. through its Trust and Registered Investment Advisory Firms. Investor information and press releases can be found at www.53.com. The common shares of Fifth Third trade on the NASDAQÂ® Global Select Market under the symbol â€œFITBâ€.