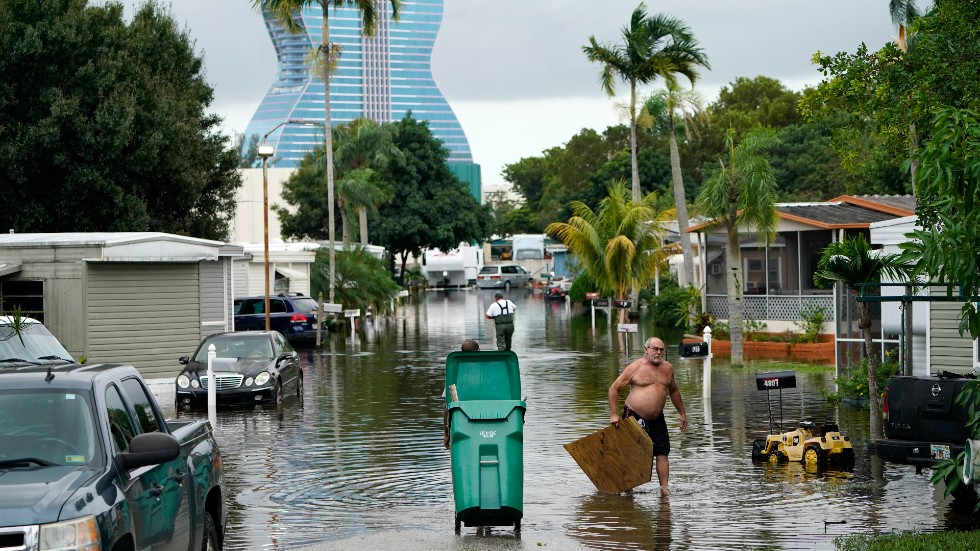 Americans whose homes are repeatedly flooded by extreme weather events may soon ask the federal government to buy their homes under a new bill introduced Thursday by Rep. Sean Casten (D-Ill.).

The bill would allow the National Flood Insurance Program (NFIP), the federal flood insurer of last resort, to buy homes and areas deemed indefensible instead of continually paying to repair them.

“You’re not forcing people to move, but you’re saying like, you know…if you want to take advantage of the NFIP program, we’re going to structure it toward a buyout rather than a rebuild,” Casten said.

Casten, who worked on the bill with Rep. Earl Blumenauer (D-Ore.), says it aims to address two issues: one serious, the other potentially catastrophic.

More immediately, the risk of bankruptcy of the NFIP is looming under the weight of increasingly frequent and severe floods. Congress paid $16 billion to bail out the program in 2018, and Congress proposed another $20 billion in 2021.

This problem is only growing. Flood damage could increase by more than 25% by 2050, putting an additional $8 billion at risk. And 14.6 million homes are at “substantial” risk of flooding, according to data from nonprofit First Street.

“Unfortunately, the National Flood Insurance Program is not designed for the reality of this problem,” Blumenauer said in a statement.

Meanwhile, the nation’s coastlines are expected to rise by an average of 12 inches in sea level rise by mid-century – with Florida and the Gulf Coast facing even higher water levels, according to data from the National Oceanic and Atmospheric Association.

“That basically means that if you build a house south of I-10 in Louisiana, if you build that house today, it’ll be underwater before you’ve paid off a 30-year mortgage,” he said. Casten told The Hill.

It’s not just a coastal problem: in Illinois alone, more than 400,000 residential properties, 80,000 miles of roads, 35,000 commercial properties, 1,000 infrastructure, and 2,400 social and community facilities are at risk of flooding, according to a national risk assessment published by a non-profit organization. First street.

Under the current system, the NFIP – which in large swaths of the country is the only place homeowners can obtain flood insurance – only makes buyouts as a last resort, and payments can take up to 5 years to reach owners.

This means that in practice, homeowners are simply repairing or rebuilding a damaged – or even destroyed – house in the same location.

“Except now, due to the rate of climate change, you know that this property is going to be flooded again in the near future,” Casten said.

This means that millions of properties, which under current policies would most likely receive funds to rebuild, are in areas with worsening climate change.

“Because the frightening reality of climate change is that not everything is linear. It’s not ‘two, four, six’ – it’s ‘two, four, eight’,” he added. “And so you see this huge acceleration.”

Under current policies, that means growing liability for American taxpayers — and little path for landlords themselves. Even though they are allowed to buy out, they are still responsible for 10% of the housing cost, which means if they can’t come up with the money, they’re stuck.

“Many flood-damaged homeowners have chosen not to use the Voluntary Floodplain Buyout Program because help to buyout flood-prone property is too slow – some buyouts can take up to five years,” said said Kurt Woolford, executive director of stormwater management for Lake County, Illinois. Commission, said in a statement.

Casten and Blumenauer’s bill would require the federal government to pay the full cost of housing to move homeowners to new homes above the danger zone – leaving old property converted into spongy wetlands and anti-flood.

These reforms take a small step toward addressing the second, more catastrophic risk — which led House Financial Services Committee Chair Maxine Waters to order members to revise the NFIP to begin with, Casten said. The Hill contacted Waters to comment on the bill.

The concern is that a growing wave of uninsured losses could ripple through the financial system, destroying small and medium-sized banks and pension funds. There have been more than $5.2 trillion in losses since 1980, 70% of which were uninsured, according to a February 2021 speech by Federal Reserve Governor Lael Brainard.

Big investors like Blackstone and Bank of America and reinsurers like Swiss Re are making their own quiet retreat from threatened properties on the plains and coasts, while selling those properties to less savvy investors – and relying on the NFIP to act as a safety net. free security, added Casten.

This creates the potential for a cascading cascade of bankruptcies analogous to the savings and loan crisis of the 1980s, which saw community banks and pension funds wiped out across the country.

“You don’t see the Blackstones coming in and buying,” Casten said. Instead, flood-prone properties are transferred to groups like “you know, the local Cleveland, Ohio firefighters pension fund.”

While the Federal Reserve shows little sign of changing lending guidelines around climate change — especially after the collapse in March of the appointment of climate finance risk expert Sarah Bloom Raskin — the NFIP reforms are a step key to strengthening the financial bulwarks that protect American taxpayers, Casten mentioned.

The worsening extent and increasing frequency of flooding, which threatens to render large swathes of the coast uninhabitable “are afraid, to be rude about it,” Casten told The Hill. It could potentially force millions of people to make politically difficult and agonizing choices about leaving beloved landscapes, neighborhoods and communities.

“But it’s not a question of whether or not we can stick our heads in the sand and the problems will go away,” he added. “The problem is only getting worse.”