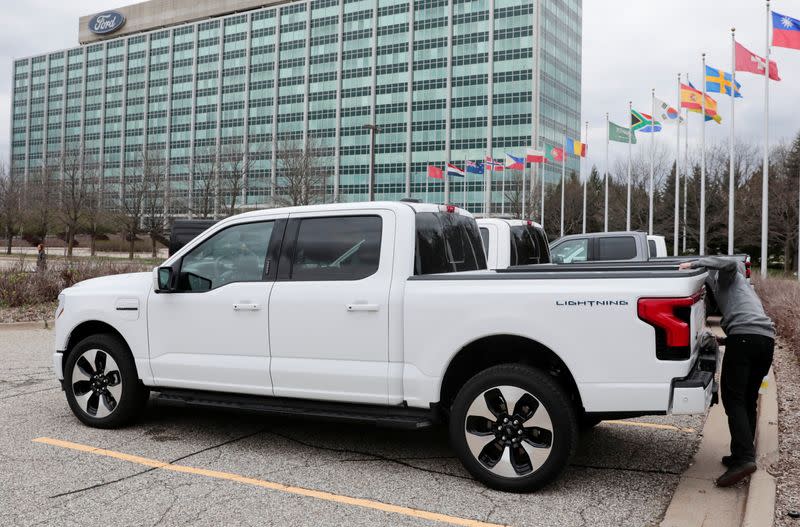 By Joseph White and Ben Klayman

DETROIT (Reuters) – Ford Motor Co chief executive Jim Farley will travel to Las Vegas next week to roll the dice on a strategy to convince dealers to cut the cost of delivering cars by up to $2,000. an electric vehicle to a customer.

Ford told dealerships that a key topic of the meetings will be a discussion of new agreements that would govern how dealerships sell Ford’s growing line of electric vehicles.

Farley told analysts in July that Ford needed to cut $2,000 per vehicle from its selling and distribution costs to compete with Tesla Inc and other electric vehicle startups that sell directly to consumers without franchised dealerships.

About a third of those savings could come from what Farley called a “low inventory model”, where customers order a vehicle and Ford ships it to the customer, rather than stocking vehicles on dealer lots for weeks. or months.

“We think that’s about — maybe $600 worth, $700 in our system,” Farley told analysts. Tesla can also quickly adjust prices on its website and keep most of the gain from a price increase.

Ford declined to comment other than to say “we are excited to meet with our North American dealers next week to grow and win together.”

Dealerships said they expect Ford to define minimum investments for charging stations and other equipment to support electric vehicle customers.

A key question will be how quickly dealers will need to install loaders, which dealers say can cost up to $500,000.

“So far the manufacturers have let us evolve and I think Ford will hopefully do the same. install five superchargers,” said Rhett Ricart, owner of Ricart Ford, a large dealership in Columbus, Ohio.

Tesla’s success in selling electric vehicles without franchised dealerships puts pressure on all established automakers to restructure their retail networks.

A Ford shift to a Tesla-style build-to-order system could come with caps on the profit margins dealers can earn on a new-vehicle sale, some dealers said.

“I see dealer margins are still very competitive, but they’re going to change,” Farley said in July. Ford intends to put more emphasis on selling products and services after the vehicle’s initial sale, he said.

Last week, rival General Motors Co said it would offer buyouts to U.S. Buick dealers unwilling to make the necessary investments as the brand shifts to an all-electric lineup. GM has already spent $274 million to trim the ranks of U.S. Cadillac dealerships.

Josh Sloan, the general manager who oversees two Ford stores and a Lincoln store for Michigan’s LaFontaine Automotive Group, said his company is willing to spend whatever it takes to switch to electric vehicles.