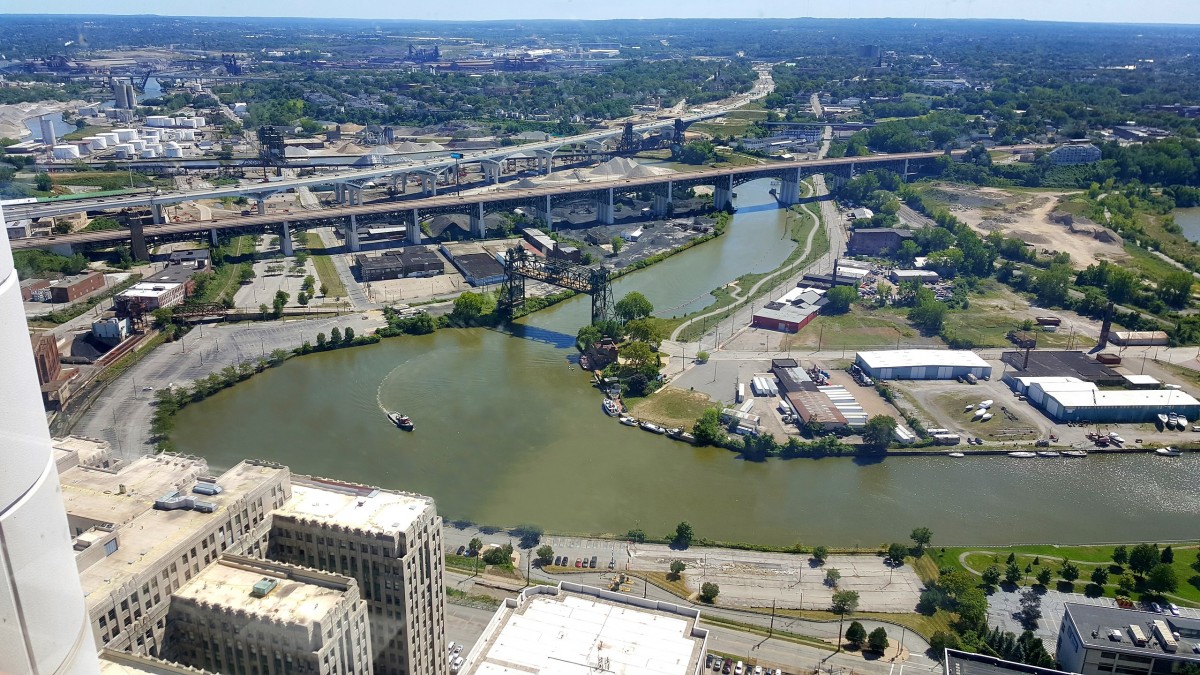 How the Cuyahoga River Reclaimed Its Otters

Once one of the most polluted waterways in the country, the Northeast Ohio River has seen a resurgence in recent decades, thanks to committed local officials.

As a child, Mike Johnson was warned not to go into the Cuyahoga River.

It’s impossible to ignore the river in Cuyahoga Falls, a town of about 50,000 just north of Akron. The city takes its name from the waterway that crosses the area and the waterfalls that dot its southern boundary. In the 1840s, several decades after Cuyahoga Falls was founded, the river was a source of power and revenue as the town’s manufacturing prowess increased.

But by the time Johnson was growing up in the 1970s, people had a very different view of the river. “It wasn’t a place you wanted to go,” he says. “I remember a lot of visual pollution. I remember people telling stories of serious illnesses associated with being in the water.

Johnson is now the chief conservation officer for Summit Metro Parks, a network of parks in Summit County, Ohio. He oversees a group tasked with protecting the area’s natural and cultural resources — including the Cuyahoga River, which runs through much of the park system — while making them accessible to the public.

Today, thanks to the work of conservationists like him, the Cuyahoga is a completely different river – a fact Johnson was reminded of in April when an otter was spotted at the water’s edge in downtown Cuyahoga Falls. This led to several local news stories about river otters and a very popular Facebook video of the slippery creature.

River otters are native to Ohio, but were eradicated in the early 1900s due to industrialization. In 1986 the Ohio Division of Wildlife began reintroducing the otter along several major rivers, and in 2002 it was removed from the endangered species list.

Katie Dennison, a biologist with the division, says otters are “fairly common” in the upper Cuyahoga River, but less so in the lower section, which runs through Akron and Cleveland. “From what I could find in our records, we had a sighting in the lower Cuyahoga River watershed – not the river itself – in the year 2000,” she says. “The first confirmed sighting I could find in the river itself was in 2009.”

Johnson was not surprised to learn of the otter sighting. After all, otters have been seen along the river before, but not so close to an urban environment. Still, he was very happy with the news.

“This is just one more piece of a puzzle we’ve been putting together since the 1950s, trying to restore [the] our region’s water quality piece by piece,” says Johnson.

In 1969, people outside of northeast Ohio became aware of the existence of the Cuyahoga River when it sadly caught fire. What people may not have known was that this was not the first time the river had caught fire, nor the worst. Between 1868 and 1969, the river caught fire 13 times. A fire in 1912 claimed five lives. Another in 1952 caused over $1.3 million in damage. And although the 1969 fire – caused by an oil slick ignited by sparks from a passing train – didn’t cause as much damage, it eventually became a media sensation.

Carl Stokes was the mayor of Cleveland at the time, and he made pollution a focal point. Stokes rallied voters to endorse a $100 million bond issue to clean up the city’s waterways. He also brought reporters to the site of the 1969 fire. But it wasn’t until Time ran a story about the river in August 1969 that people outside of Cleveland began to take notice. “Chocolate brown, oily, bubbling with subterranean gases, it oozes rather than flows,” the Cuyahoga article described. The media attention worked. In December 1970, President Nixon created the Environmental Protection Agency, and in 1972 the Clean Water Act became law. In Cleveland, the new Northeast Ohio Regional Sewer District, along with the Ohio EPA, made river cleanup a priority and targeted the area’s top polluters, leading to a grand jury investigation into 12 companies accused of polluting water. .

While the river’s overall health has improved over the years, decades of industrial pollution in Cleveland means there’s still work to be done, especially in the Lower Cuyahoga, which empties into Lake Erie.

Much of the work underway to improve the river falls under the Cuyahoga River Area of ​​Concern Committee, which is part of the larger Great Lakes Areas of Concern. Under the Great Lakes Water Quality Agreement of 1987, an Area of ​​Concern is defined as a geographic area “where significant impairment of beneficial uses has occurred as a result of human activities within local scale”.

Beneficial use impairments of the Great Lakes address issues related to wildlife, pollution, drinking water, habitat loss and more. Recovery targets are created by state and local groups. As goals are achieved, deficiencies are removed from the area of ​​concern. The Cuyahoga Area of ​​Concern started with 10 deficiencies. Four of them, relating to public access, unwanted algae, fish consumption and aesthetics, have been deleted. The committee was able to remove them after developing new parks and public access points, implementing nutrient reduction efforts to reduce algae, aligning fish consumption advisories on Lake Erie, and curbing the presence of materials. such as sludge deposits and oil sheen.

Once all deficiencies have been removed, an area of ​​concern is removed from the list. The Cuyahoga River is expected to be delisted between 2027 and 2030.

Jennifer Grieser, chair of the Cuyahoga committee, explains that when it comes to addressing the six other deficiencies in the river, some are addressed simultaneously while others are addressed individually.

“Currently, there are three that we have packaged together. Those are those related to fish populations, macroinvertebrate populations, and fish habitat,” says Grieser, who is also director of natural resources for Cleveland. Metroparks: “When it’s beneficial to fish habitat, it’s beneficial to fish populations and macroinvertebrate populations. So you’re improving the habitat, presumably, you’re also improving those populations. They’re aiming to fully address these three interrelated deficiencies by 2025.

As for completing the other three deficiencies, she says it often comes down to when opportunities present themselves. For the “Restrictions on Navigational Dredging Activities” deficiency, for example, the state decided to begin by removing the deficiency on the smaller Black River Area of ​​Concern, located west of Cleveland. Now that the degradation has been removed from the Black River, the state can apply the lessons it has learned from the process to its broader areas of concern that deal with degradation.

The restoration the Cuyahoga has undergone in the 53 years since it caught fire is breathtaking in scale, advocates say. The number of organizations, government agencies and community activists working to create healthier waterways is impressive. The audience is also part of the story. Johnson and Grieser both mentioned the river’s growing popularity as a favorite recreation spot for locals.

“Never before, at least in my lifetime, have so many people wanted access to water,” Johnson says. “People want to enter the Cuyahoga River. They want to swim in it. They want to fish there. They want to go kayaking. And for the first time in decades, it’s possible to do all of these things.

Brittany Moseley is a writer based in Columbus, Ohio. She is passionate about the arts, civic engagement, racial equity and great storytelling.

Fed: Sharply higher rates may be needed to curb inflation