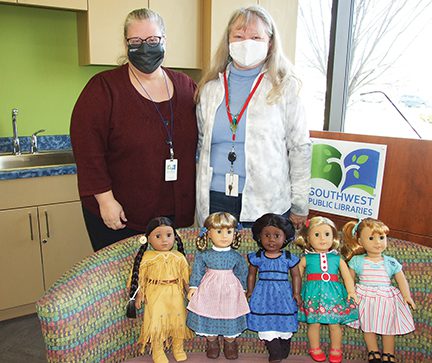 One of the most popular programming events held at the Grove City Library is its annual tea party with a number of American Girl dolls serving as special guests.

Welcomed close to Valentine’s Day, kids of all ages sit down with the youth services staff where they chat about their miniature friends while sipping hot drinks and nibbling on delicious snacks.

â€œIt’s a very good program,â€ said Lore Lehr, the youth services librarian. â€œWe’ll take the American Girl doll collection out of the library, introduce them to the kids and their dolls, and then sit down and brush their hair, chat and have a good time. “

She said she thinks what makes this event so special is the look of these American Girl dolls – a toy coveted by many but not quite affordable by all.

Depending on the collection, each doll can cost up to $ 150, not including accessories and clothing.

This event, Lehr added, often allows children who have always wanted an American Girl doll to be with one, if only for the duration of the tea party.

â€œThey have that experience, however limited it may be,â€ she said.

This one hour limitation, however, will change in the near future.

Starting next month, Southwestern Public Libraries will launch an American doll lending program at the Grove City Library. It will be followed by a similar program at the Westland Area Library in September.

As part of the loaner program, children with library cards will be able to reserve one of five American Girl dolls from her collection of historical figures for a week.

â€œHonestly, I can’t wait to see how this goes,â€ said Meredith Wickham, director of Southwestern Public Libraries. â€œWe’re all a little nervous, all a little excited, but we’re very happy to bring this program here. “

The idea for this program began to germinate in Wickham’s mind several years ago while attending a national conference for libraries. While there, she heard about a Mississippi library that had started an American doll lending program with local modifications.

According to Wickham, the director of the Columbus-Lowndes Public Library asked historians in the area to contribute to the program by writing a guide to local life during the doll’s time.

â€œI thought it was a brilliant idea,â€ she said. “With this angle, kids don’t just learn the doll – they learn the history of their own community.”

At the time, Wickham was the director of the First Regional Library in Hernando, Mississippi, but was unable to implement a similar program there. When she became director of SWPL last year, she wanted to make it a future goal. She just didn’t know it would happen so soon.

The library recently received a donation from Library Administration Advisor Donna Carter. She said she wanted branches to do something “fun and different” with her cash gift.
When Wickham reached out to Carter about the idea, she said Carter was all for it.

â€œI think we all want to do our part to make educational tools more accessible to the community,â€ Wickham said.

Speaking with the youth services department and historical research staff, they determined that they didn’t want any of the dolls; they wanted the dolls of historical figures who could have traveled the community in their respective era. For the Grove City collection, they will have Kaya, a Native American from the 1760s; Kirsten, a Swedish immigrant from the 1850s; Addy, a runaway slave from the 1860s; Kit, a girl from Ohio living during the Depression in the 1920s; and Maryellen, a 1950s polio survivor. The doll collection has yet to be determined for the Westland area library, although it also has historical figures.

When a child books a doll, it will come with a limited number of accessories but with a wealth of information. Included with the original introductory book, it will be accompanied by a guide describing what life was like in this community during the doll’s day.

Shailer said it’s not often that the group is given such an opportunity.

â€œIt was such a nice experience for us to be able to do this,â€ she said.

Each writer has created a day-in-a-life setting using a doll’s friend as the perspective character. For example, Shailer wrote an original character named Aponi who befriended Kaya in the 1760s. They live near the Scioto River and their countrymen prepare for an annual Green Corn Festival. Kinser centered her story on the adventures Maryellen and her friend had at a local ice rink – one that those who lived in town in the 1950s will fondly remember. And Watkins focused his on the immigrant experience of Kirsten’s day in the 1850s.

Shailer said she was not aware of the popularity of American Girl dolls before embarking on this project, but she said she hopes the children who book these dolls will be just as keen to know. more on local connection. She added that she was especially excited to see how they use the personal journals provided.

â€œI can’t wait to see how everything is received,â€ she said.

Wickham reiterated that the library is too.

â€œWhen we started putting the pieces together for this program, we wanted to make sure that it wasn’t just a doll lending program, that we weren’t just helping a child engage with a doll. toy, â€Wickham said. â€œWe want to encourage them to read about the doll, their history and experiences, and then learn more about our local history and life in their respective eras.

Wickham said the Grove City Library hopes to launch its program on Valentine’s Day. Those who reserve the dolls and bring them home for the week are asked to take great care of their well-being. Although they are free of loan, fines could be imposed if they are damaged and have to go to the American Girl Doll Hospital.

Because they will be on loan to the public, the dolls will have to undergo a brief period of quarantine after being returned to the library. This collection of American Girl dolls will only be kept at the Grove City Library. They will not be shipped to other locations, although any customer of a Central Library Consortium branch can reserve a doll and pick it up at the Grove City Library.

Lehr, the snack lover, said she was excited about the possibilities of the program and can’t wait to hone her hairdressing skills.

â€œSometimes it’s hard to believe I’m paid to sit and drink tea with dolls while I’m at work,â€ she said. â€œNow I can sit down and comb their hair when they return to the library while I’m at work. Guess that’s why I’m still a youth services librarian after more than two decades. It gave me a lot of pleasure. “

Columbus was a popular bowling center in the 1950s