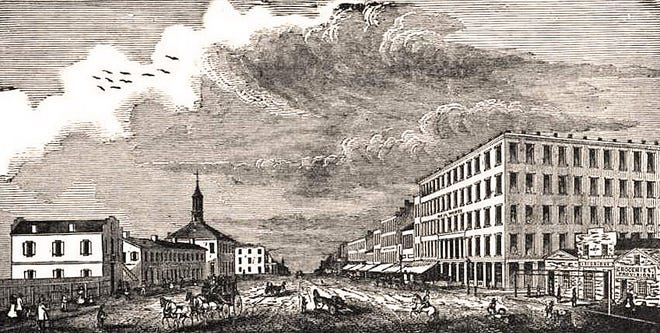 Columbus, Ohio is a crossroads city. Founded in 1812 as a city planned to be the new state capital, Columbus is a city of diverse origins.

Plated on the “high banks opposite Franklinton at the Fork of the Scioto,” Columbus was a focal point where several early American land grants came into contact with one another.

To the west and across the Scioto River was the Virginia Military District. The village of Franklinton was first settled on its north side in 1797. Largely settled by southerners from Kentucky and Virginia, newcomers soon encountered settlers from New England who had founded Worthington in 1803 .

All these settlers wondered who would settle where Columbus was – in a place called the Refugee Tract. Starting at Fifth Avenue in the north and Refugee Road in the south, the route began at the Scioto River and headed east for several miles.

Reserved for residents of Nova Scotia who had lost property due to their revolutionary loyalty, most refugees never made it to Ohio. They sold their land grants for pennies on the dollar to speculative “landlords”. Some local landowners founded Columbus under the direction of the Ohio General Assembly. Others sold their land to anyone who wanted to buy it. Thus, Columbus soon found herself among residents of Pennsylvania, New Jersey, and even Canada.

All of these people mingled with each other in Columbus’ social cauldron on several major issues of the time. Some citizens favored temperance or even the prohibition of alcohol.

Other advocates have promoted increased rights for women. In early Ohio, as in much of America, women had few rights over their own children, could not enter into contracts on their own, and could not vote. Some Ohioans fought for equal rights for women. Other Ohioans objected.

But the main issue that divided the people of Ohio in the beginning was slavery. Slavery was forever outlawed in Ohio by the Northwest Ordinance of 1787 and the subsequent Ohio Constitution of 1802. But although slavery was outlawed, runaway slaves could be prosecuted and returned to their owners.

As it wasColumbus experienced a growth spurt in the early 1850s

As it wasOnce in the Millions and Down to the Hundreds, the Bison Are Back

Some runaway slaves escaped to final freedom in Canada along a path called the Underground Railroad. The escape route was operated by local residents – black and white – opposed to slavery. Columbus housed several stops along the railroad.

Runaways who decided to stay in Ohio always faced the possibility of being captured and returning to slavery. In 1840, Columbus was a city of over 6,000 people, and over 500 were African Americans, many of whom were emancipated slaves or were born free in Ohio. Many others were runaways. It was a firestorm waiting for a spark.

Jerry Finney was the spark.

In 1857, local historian William T. Martin told the story of Jerry Finney in the first published history of Franklin County.

“In the spring of 1846 a case of kidnapping occurred in Columbus. On the 27the of March, after dark, Jerry Finney, a black man, who had resided in Columbus for fourteen or fifteen years, was lured into the city of Franklinton, to the office of William Henderson, Esq., who was, at at the time, an acting Justice of the Peace in Franklin Township.

“The necessary certificate having been previously prepared, Jerry was immediately handed over by the judge, in his official capacity, to the decoy party, one of whom was Alexander Forbes, of Kentucky, who held power of attorney from Mrs. Bathsheba D. Long of Frankfort, Kentucky, to whom Jerry was claimed to belong and was to serve as a runaway slave. Jerry begged for a fair trial but to no avail, he was immediately handcuffed and put in a car, stood at the door for that purpose…and delivered to his former mistress.

“As Jerry was generally known to our citizens (having been cook and general waiter or servant in most of our pubs), his sudden disappearance among us, and the time and manner of his capture, created some excitement. “

Henderson, the local justice of the peace, and several others “were arrested and held on bail to answer the kidnapping charge.” In the September term of the Franklin County Court of Common Pleas, the men went on trial. William Dennison of Cincinnati led the charge. He later became governor of Ohio. The defense was led by Noah Swayne, who later became a justice of the Supreme Court of the United States.

It was a formidable legal confrontation and lasted for some time. The defendants were found guilty, but the verdict was later overturned on appeal.

“Jerry remained in Kentucky for some months as a slave, until, by subscription of the citizens of Columbus, a sufficient sum of money was raised to purchase his freedom and restore him to his family. He came back but the seeds of consumption were sown in his system. In a short time, he was emaciated, fell ill and died.

It was a conflict that helped set the stage for the greater struggle called the American Civil War.

Local historian and author Ed Lentz writes the As It Were column for Community news this week and The Columbus Dispatch.