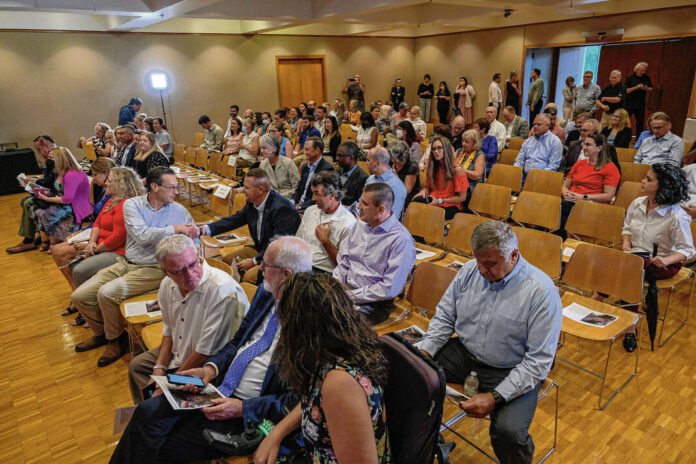 For the second time in 30 years, Columbus is receiving a statewide honor for culture and achievement.

The Indiana Chamber of Commerce has named Columbus its 2022 Community of the Year, with Cummins, Inc. as title sponsor. House Speaker and CEO Kevin Brinegar made the announcement Monday afternoon at Columbus City Hall, with city officials and community leaders gathered to celebrate the news.

Columbus Mayor Jim Lienhoop told attendees the award is a reminder that “what we call ‘the Columbus Way’ really works.” »

The Indiana Chamber says the Community of the Year award recognizes “a deserving Hoosier community for making significant contributions to its local business climate and overall image over the past year.”

Columbus will be recognized at the 33rd Annual Chamber Awards Dinner Nov. 16 at the Indiana Convention Center in Indianapolis. The chamber will also celebrate its 100th anniversary at the event.

Brinegar said Columbus stood out because of its efforts to create a great place, its success in attracting diverse talent, and a “thriving economy.”

“The family connection has nothing to do with it,” he laughed, referring to his younger brother, city official Jamie Brinegar.

This is the second time Columbus has received the award – it was also named Community of the Year in 1992.

“We’ve had our eye on Columbus for a long time,” Brinegar said. “And obviously, it’s been a very, very long time since the community has been recognized. And we just felt it was high time to lift the city up again.

The chamber said Columbus was chosen by a five-person panel from the Indiana Chamber after extensive review of the other nominated cities.

Cummins, Inc signed on to be the award’s title sponsor a week before the public announcement because the company learned of the recognition from Columbus and wanted to show support for its more than 100-year-old home.

“What makes Columbus so special is that it has the rural feel of a small Midwestern community along with the talent, innovation and culture typically found in a big city,” said Brinegar said. “This mix is ​​simply dynamite. The Indiana Chamber is thrilled to recognize employers, individuals here in Columbus who are advancing and positively impacting lives.

After Brinegar’s speech, local officials took time to recognize organizations and individuals who have contributed to the community, as well as past and present initiatives to improve the area. The prize, Lienhoop said, belongs to everyone and is “truly won by the community.”

“Our schools, our healthcare system, our habit of philanthropy, our efforts to preserve our built environment while meeting the human needs of those struggling with addiction and poverty…all point to the first step in building the best community of its size in the country,” he said. “Now I realize that today’s price doesn’t go that far. We haven’t finished. But an event like this allows us to pause for a moment and take stock of where we are and accept the pat on the back for a job well started.

24-Hour Check Cashing Near Me: 6 Places to Cash Checks After Hours